Zoroastrian Atashkadeh in Yazd, Zoroaster and his followers

Seeing a few children, firebox in their hand, and their occasional naughtiness but with caution not to fall into the ground was a common sight in ancient Iran. The children who like fire were the heat and kindness of every family. At that time, there was no match or other instrument to make fire. Thus, in one place, a fire was always on so that the people can take an amount of fire daily to turn on the firebox of their house. “Kadeh” in Dari Persian language means house, and “Atashkadeh” means the house of fire.
The duty of bringing fire from the Fire temple was the responsibility of the children of the family. For this reason, the family with no children, its firebox was known as blind or off, that we now find out that where the root of the proverb: “Your firebox be green (eternally burning)” comes from. Thus, one of the sweetest wishes for any family was: “Your firebox be green (eternally burning)”. Agriculture was the ancient Iranians’ job and the foundation of their lives was on the basis of sun’s light and heat. The fire is also the available light, heat, and brightness on earth for people. That is why it is one of the most important and sacred elements in human life. It was after the discovery of fire that culture and civilization formed.
The essence of fire is to sit down around it, and over time, fire temples has become a gathering place to hold Zoroastrians’ religious celebrations and ceremonies.
In Sassanid era, there were three famous fire temple in Iran:
“Azargoshasb” fire temple means moving fire. This fire temple was located in west Azarbaijan province, and was the most important religious center Iran’s empire in the centuries before the Arab conquest. It was dedicated to the warriors, the army, and the kings. Azargoshasb fire temple that is mistakenly known as Takht-e-Soleyman, is located near Takab city and Takht-e Soleyman area in west Azarbaijan province, 2km northeast of this city.
“Borzin Mehr” or “Azar Borzin Mehr” fire temple is one of the holy fires of Zoroastrians’ priest, a type of Bahram fire (the fire of kings’ fire temple) is located on Khorasan Reyvand Mountains, near Suwar Lake. Borzin Mehr was the special fire of Vasterioshan (Iranian farmers in the Sassanid era and earlier), and now there is no trace of it.
The third fire temple is “Azar Faranbagh” or “Kaviyan” is located in about 20 meters high in Kaviyan direction, from Heram and Kaviyan villages, Jouyom district, Larestan city in Fars province, and 42 km southwest of Jouyom, in the halfway to Siraf and Darabgard.
At the time of the Arab invasion to Iran, the two Azargoshasb and Azar Borzin Mehr fire temples were extinguished. At the behest of Yazdgerd Ш, the last Sassanid king, the third fire temple’s fire (Azar Faranbagh) was rescued and brought to the center of Iran and kept for about 700 years in the “Ashkaft” cave near Aghda city. Now, you can see the remained structures of that era inside the cave by going along distance to the hillside and reaching the cave. When it was possible for the government to determine the location of the fire and extinguish it, the fire was taken to “Haftador” (Haft Azar) village, and then in 1174, from Aghda to Ardakan (Torkabad village), and it was kept there about 300 years. After that in 1474, it was taken form Torkabad to Yazd and kept in the house of one of Zoroastrian priest named “Mubed Tirandaz Azargoshasb” in a neighborhood known as “Khalaf Khan Ali”.
Throughout this time, Zoroastrian always ask governments to build a fire temple, but for the sake of government interests, they did not receive permission. In 1922, Zoroastrians of Iran were finally allowed to build a fire temple by the command of Reza Shah Pahlavai. In 1934, by the endeavor and patronage of Lord Jamshid and getting the attention of Persians of India (many Iranians, especially after the Arab invasion, had emigrated to India, which they are called Persians of India) the construction of the fire temple began at the personal expense of a Persian Zoroastrian called “Hamabaei”, and on a piece of devoted land owned by several Zoroastrians of Iran including Amanat btothers, in memory of the death of their father (Ardeshir Mehrban Rostam) in Yazd.
The Zoroastrians’ fire temple was completed by Persian architecture in 1936 and finally in 1939, this 1547 year old fire was transferred to the fire temple. The fire of the Yazd fire temple is from Bahram fire (the specific fire of Sassanid kings) that doubled its importance.
There was always a spring or stream next to the old fire temples of Iran, because it was trying to put together the four elements of water, wind, soil, and fire. After that, they tried to have a spring or stream next to every fire temple. But due to the lack of spring and stream, the constructed pool in Yazd fire temple was built for this reason. At prayer times, you see the bright dressed men and women entering the fire temple with bare feet (without shoes).
The holy fire of the fire temple is in a large bronze furnace, and a person named “Hirbod” is responsible to keep it. Now, you can watch this eternal fire with a long and adventurous past that now burns quietly, fearlessly, and overtly, from behind a glass wall. 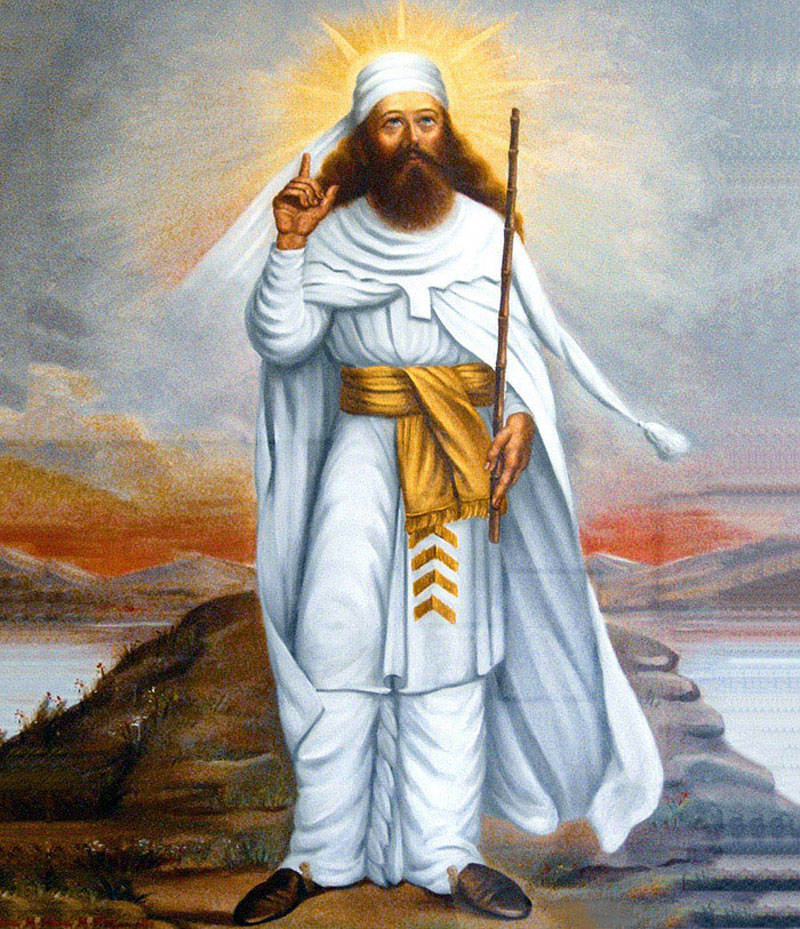 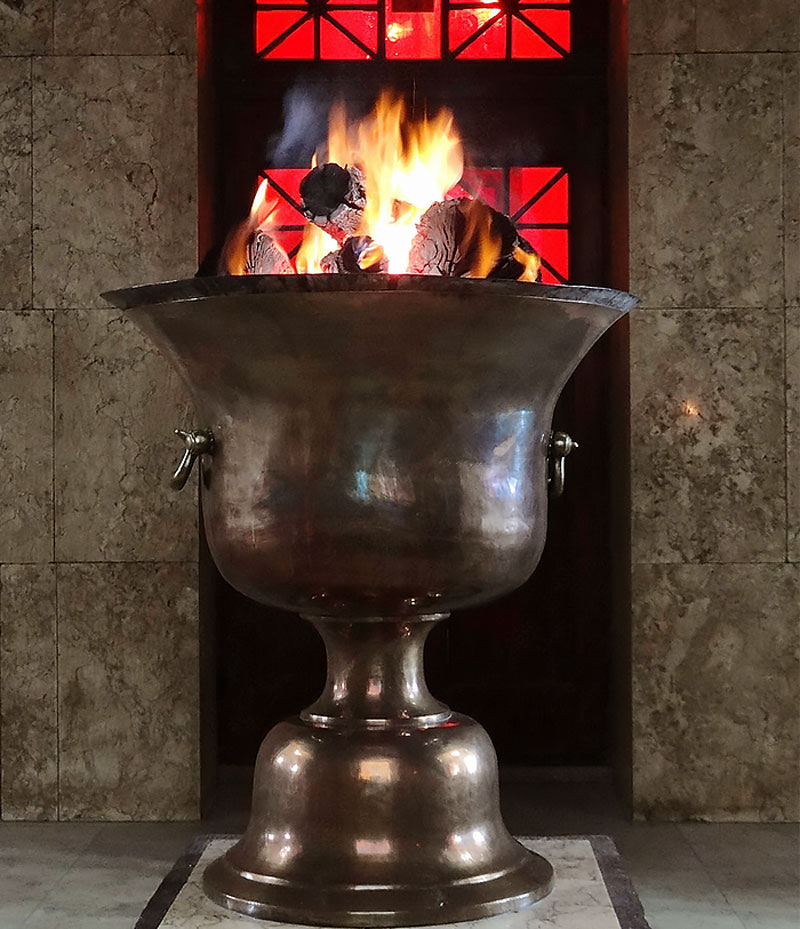 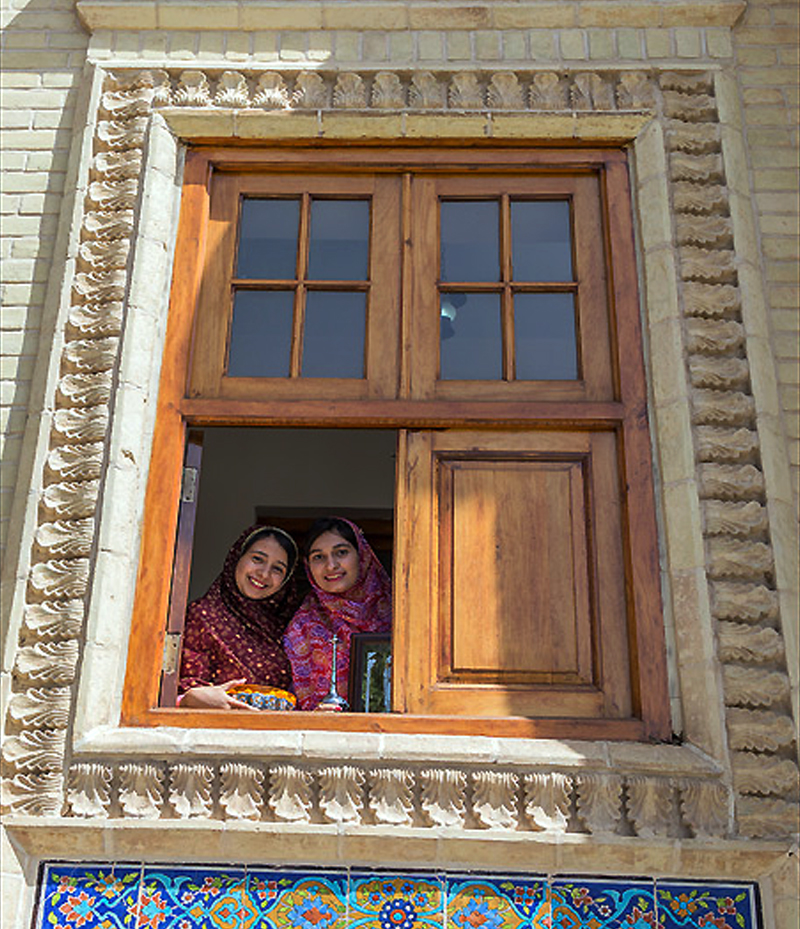